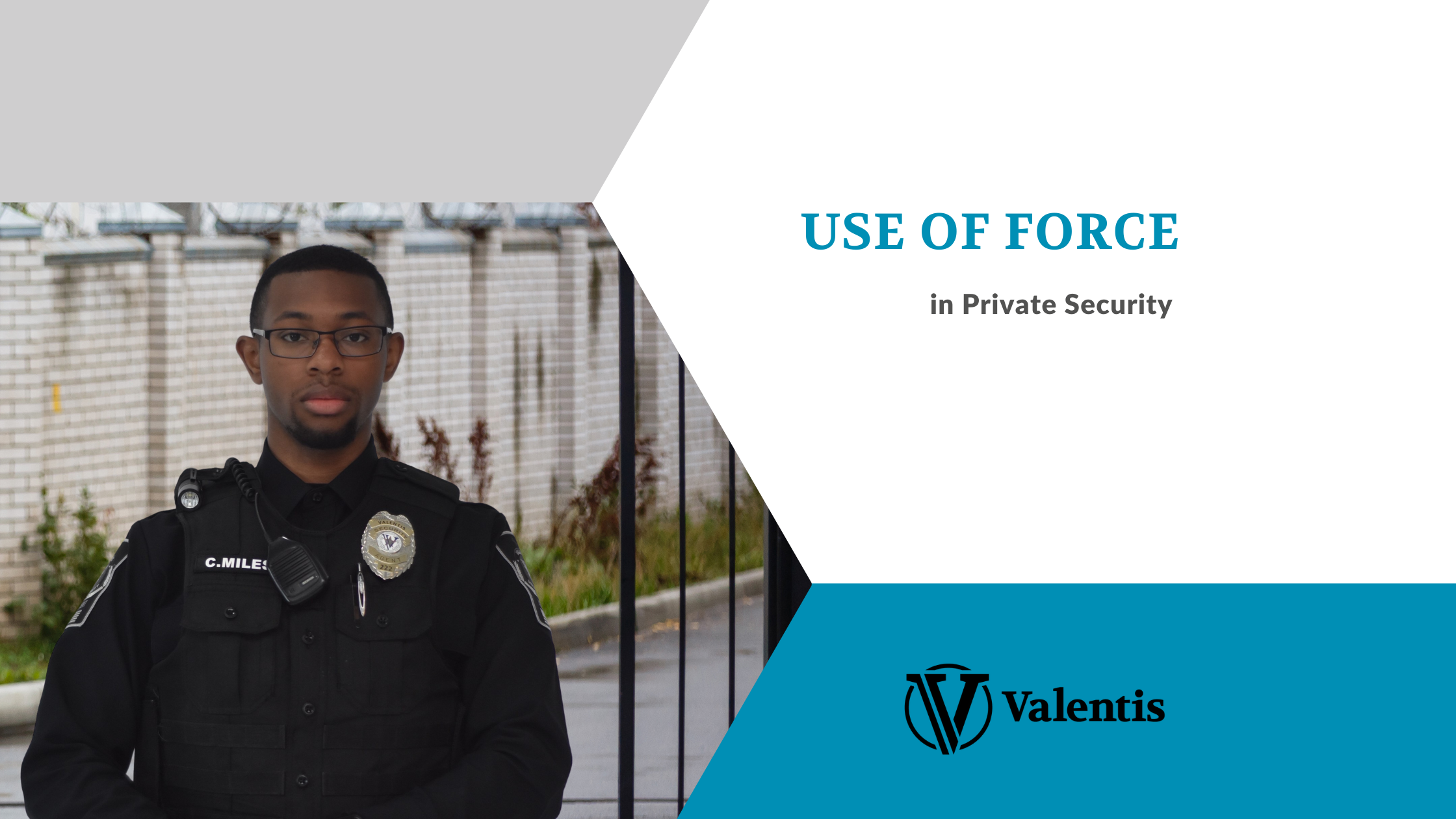 The hot topic around the public safety community, over the last year, is the use of force and the application of it during emergent incidents. This topic has created an influx of Use of Force Subject Matter Experts to testify in court trials, appear on national television and radio broadcasts, and share their expertise in the forums available to them. This topic is here to stay and will only reverberate when there is questionable use.

Use of force is divided into three simple statements:

It has costly consequences if improperly used. These consequences can include civil and criminal actions against one or more parties, including the security officer, security company, and the client.

The most common pitfalls associated with the use of force that will typically lead to civil or criminal actions are:

How is use of force measured?

The most logical first step is to compare what happened in an incident to written state laws. However, it is not always that cut and dry. One of the best measures to determine if use of force was applicable in the situation is to test the "Reasonableness Standard." This Standard derived from a U.S. Supreme Court case, Graham v Connor. The Court rules that "The 'reasonableness' of a particular use of force must be judged from the perspective of a reasonable officer on the scene, rather than with the 20/20 vision of hindsight." It also reinforced, "The 'reasonableness' inquiry in an excessive force case is an objective one: the question is whether the officers' actions are 'objectively reasonable' in light of the facts and circumstances confronting them, without regard to their underlying intent or motivation."

What does this mean?

The test is simplified in this manner:

What actions and force applied did the officer take?

If and only if all six questions can be answered YES, then the use of force is reasonable and justifiable.

Who makes the decision to authorize force?

Many private security companies take a backward stance on the application of force. In other words, they are more aligned with not doing anything than face the possibility of a lawsuit. If utilized correctly in conformance to the law and company policy, if it exists, the question begets why be concerned? Moreover, the question also arises should the security officer stand and do nothing while watching physical harm come upon themselves or another person? There are many questions related to this topic, and only a few can be addressed in one article.

The decision to authorize force in any situation ultimately rests on the security company. The company may or may not have an appetite for the risk or do not know enough to manage it properly. It is indeed a risk and can be a costly one. The risk heightens when there is a lack of training and policies. The mere reliance on state training standards will never reduce the risk based on multiple reasons including nonexistent or subpar standards.

What is a client's role in the use of force?

A client needs to proactively understand how a security company deals with the use of force. Ultimately the client can be held responsible, in part, should the application of force go awry because they decided to hire the guard company to provide the services.  The agreement executed will make the client a party to any use of force lawsuit.  It is also not that easy for a client to instruct a security company to wait for external assistance and disregard the application of force.  It is, in fact, the wrong approach. One crucial recommendation, in any situation, for the client is to require the prospective company to provide an overview of its use of force risk mitigation program. The most compelling reason to understand a company's risk mitigation practices is to protect the client from litigation, especially an incident involving the use of force. There is no more significant concern for a client than that of a looming lawsuit filed for negligent activities by its hired security guard contractor for unlawful use of force. The client must examine more than price and name but recognize intricacies surrounding humans making mistakes and evaluate how the company will handle and deal with the associated consequences on all levels.

The bigger problem in the industry

Risk mitigation is critical to using force, which includes less lethal or deadly force, and mismanagement of it can be a very costly mistake. A security guard company should have a risk mitigation plan to address heightened response levels to a specific threat. Such a particular risk mitigation plan will lessen the burden later to prove the security guard acted negligently, civilly, or criminally. A company should know and articulate the different levels of force and proper execution at each level during litigation.

For example, a suitably organized company should not experience any problem addressing, in detail, a client's concern about using unarmed guards versus armed guards and the benefits or associated risks with both options. A company that uses the selling point that it deters criminal activity because of the mere presence of armed guards is probably not going to mitigate the risk.

The root of the problem surrounding the use of force in the contracted security industry is a self-created one. Security companies willingly place personnel into unfavorable situations because they want the contract. A company versed in risk mitigation justifiably assesses the totality of the risk involved in a client's situation before submitting a bid. A known hostile environment in a potential client's case should trigger a security company's concern. If a company is properly assessing its risk with a paramount focus for its own security staff's safety, no company will submit a bid for unarmed personnel in a known hostile environment. If a client is adamant about unarmed security, then a company designed to deal with risks would refrain from submitting an unarmed bid but would explain in explicit detail a proposal for armed staff because of specific reasons that they can confidently and justifiably support and discuss. Security guard companies that submit bids so that they can procure contracts without reviewing the associated risks are generally companies that will be more of a risk alone to the client than any external threat.

Solving the application of force challenge

We recognize the challenge in the industry, but there are solutions. The most basic solutions are ongoing readiness standards, complex and defined policies, and training are the most vital measures to reduce the use of force risk for the client.

First, readiness standards need to be ongoing and active that require the security officer to demonstrate their competency in various modules frequently, e.g. biannually, annually. These standards must exceed state minimum requirements. They must be documented and validated by both student and instructor with proof provided upon the client's demand.

Second, the use of force continuum is the guidelines and standards that need to be followed when engaging a resisting subject in any given situation. The use of force continuum is written in a complex manner to address as many scenarios as possible to leave no room for potentially confusing outcomes. The continuum is usually based on state law. Still, it expands using the best-proven practices that can be favorably argued to the security company and client's benefit during any litigation. One can say there are different ways to write a use of force continuum, but it ultimately comes down to what will stand up against the test of a trial in a courtroom. The true risk mitigation measure is winning against lawsuits or criminal actions in a courtroom when there is clear and defining evidence that supported the use of force in the first place. The failure to have these written rules establishes a clear indicator that the company will fail to protect the client in litigation versus the structured environment that should be in place.

Third, every security officer employed is trained on the use of force continuum to understand it. The security officer must understand the consequences of misapplication, and they must recognize its severity. We do not mean to watch a video in a conference room. Every element of the other training that includes less lethal and lethal force provided by the company should always tie back into the use of the force continuum. No security officer should have a single shred of doubt in their mind that when the training is complete that they understand what they are allowed and not allowed to do.

There is a fourth and final solution to this challenge, but it centers squarely on the security company. A common complaint within the industry is security companies refusing to support their security officers if the use of force is utilized. Security companies do exist demonstrating their use of force competency through comprehensive policies and professional training that will, without hesitation, support their personnel if the force applied is reasonable and justified.

The misuse of force in an incident is a genuine problem that must be mitigated, but the failure or hesitation to act with force when clearly justified can be a real danger.

Security Risks are not mitigated by checking off a box